The heart dances to its own beat

Five months ago, when our dog Willow died, I thought my heart had broken. He was such a good dog and an amazing companion for 16 years. I thought I would never get another dog. I even told myself that life was easier and less complicated when there was no animal to worry about or deal with – not to mention all the money I would save.

However, although some things make a lot of sense to the brain, the heart dances to its own beat of the drum. When I was in Ohio in December visiting my grandchildren I spent a lot of time with the family dog, Baby. She is a wonderful, loving being who must have sensed I was still healing a broken heart over Willow, because she lavished me with love and affection.

It was then I realized that even though it made “sense” to not get another pet, I was reminded that there are things that defy logic. For non-animal people, it is hard to understand why we would upset our lives, and spend a great deal of money, time and attention to a pet. After all, there are many reasons not to own a pet and only one to own one… Love. 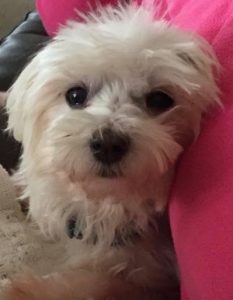 Having a living breathing being who is there only for the purpose of loving you opens up the human heart in a way nothing else can. Saving an animal from a life of hell or death, warms the soul and makes one believe that in some small way, a simple act has made a huge difference in another’s life.

So we began to look for a dog and, although it seemed nothing was working out, I decided to just turn it all over to God knowing that as we were looking for the right dog, she was looking for us.

Then on Saturday we found each other! Her name is Kali which is a Sanskrit name of a Hindu goddess representing empowerment. She had been dropped off in the night deposit drop box of a shelter during the night because her owner received a new puppy and no longer wanted an older dog. Her story broke my heart and is an indication of our society’s love of all things new, while thoughtlessly discarding the old.

She is gentle, yet fearless; agile and athletic, yet warm and friendly. She has soft brown eyes, a button nose and a smile that is contagious.  She is a gift who has opened my heart and awakened my soul.

Quote of the Week

“Until one has loved an animal, a part of one’s soul remains unawakened.” — Anatole France

In One Spirit,
Arlene